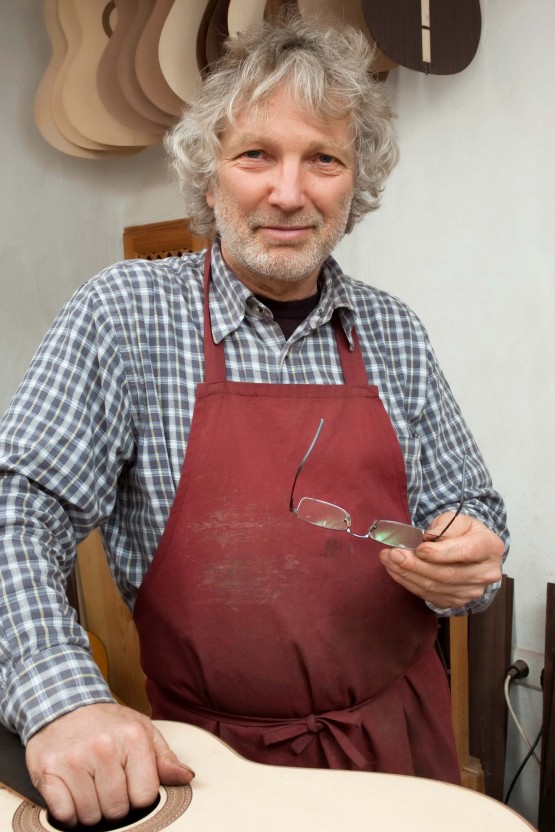 Andrés Daniel Marvi, born in 1956. In his youth he already played the guitar with regularity. After having finished his A – levels, he gave lessons in several conservatories.

Meanwhile he devoted himself to designing his hand – made guitars with the aim of creating his own sounds. In 1984 he took part in a guitar course in Zurich under the guidance of José Luis Romanillos.

In this way his talent as a craftsman was confirmed as well as his manual dexterity and capability. He took an exam in guitar manufacturing in Erlangen in 1985.

has lived since 1988 in a small spanish village near the guitar metropolis of Granada.

Now he can look back to his more than 30 years of making guitars.

It is there that he makes his instruments, surrounded by Andalusian atmosphere and he keeps in touch with numerous colleagues of the same trade. After a number of years of guitars handfactoring and always open to innovations, Marvi took part in a further higher course in 1992 once again with Romanillos in the city of Cordoba.

His permanent contact with the guitar world led him to the guitar festival of Liechtenstein (LiGiTa) in 1996. It was in Liechtenstein that he met the guitar dealer Norbert Giebel, who immediately recognised the extraordinary quality of the Marvi guitar. After exchanging their views, Marvi created a new model of concert guitar.